Because of its location in the lower Columbia River Gorge, Menucha is a crossroads of heritage histories.

For millennia, one of the highest concentrations of aboriginal peoples on the continent sustained themselves by the abundance of this region. Each year, 16,000,000 salmon pushed up the torrents of the lower Columbia in a display of nature’s capacity for drama.

On a fall day in 1805, Meriwether Lewis, William Clark, and their colleagues in the Corps of Discovery streamed past Menucha on their way to the Pacific Ocean.

In 1874, John Painter, an English sailor whose ship wrecked in Hawaii some years earlier, fled the island with his Hawaiian wife when family members were threatened with confinement to a leper colony. The Painters aimed for Oregon and homesteaded Menucha. Some apple and pear trees they planted in their orchard on the west side of the property still bear fruit. 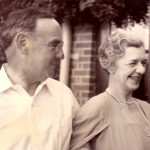 In 1914, Julius Meier, partner in the Meier and Frank department stores, and his wife Grace envisioned a country retreat. He scouted a site away from the bustle of Portland and the distractions of a political career – one that would see him become Governor of Oregon from 1931 to 1935. The Meier family purchased the Painter property and named it “Menucha,” a place of rural elegance where notables like Herbert Hoover (see photo) and Franklin Delano Roosevelt came for visits.

Initially, the Meiers reached Menucha from Portland by steam-power up the Columbia. But, in 1913, just as the Model-T automobile was rolling off assembly lines, ground was broken on the Northwest’s first major paved highway — in the Gorge. Now listed on the National Register of Historic Places, the “poem in stone” became the first Scenic Highway in America.

The primary residence, now known as Wright Hall, was built in 1927 by Lorenz Brothers Builders who were also hired by President Roosevelt to direct the WPA’s construction of Timberline Lodge. Designed by architect Herman Brookman, Wright Hall influenced what became known internationally as a “Northwest” style of architecture. 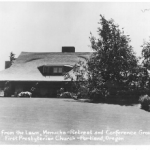 In 1950, First Presbyterian Church of Portland purchased the property from the Meier family, who were pleased to see it dedicated as an ecumenical center, a gift in perpetuity to communities of people from around the world.

The estate’s name given by the Meiers, “Menucha,” fit this place so well that the church chose to keep it. The Hebrew word “Menucha,” (pronounced “Men-oo-ka”) conveys “rebuilding,” “renewing,” or “restoring.”  It is found in Psalm 23 translated as “still” in the line “He leads me beside still waters, he restores my soul.”

In the more than half century since First Presbyterian purchased this site, we have been providing an excellent facility in a setting of nearly incomparable beauty for meetings of and ministry to members of churches and other nonprofit organizations whose purposes are compatible with a Judeo-Christian view of the world.

Menucha serves about 400 groups annually (averaging  9,000 guests eating 42,000+ meals). In the early years of FPC’s ownership there were many youth camps; now we serve primarily adult retreats, workshops, family reunions, seminars and conferences of nonprofit organizations.  We also offer many of our own programs in music, art, and church leadership.

At Menucha, we encourage and support purposeful work in this sacred space so that those who come here will return to their own communities rejuvenated and better able to serve their fellow human beings.