Bluegrass in the Gorge

Home » Programs » Bluegrass in the Gorge 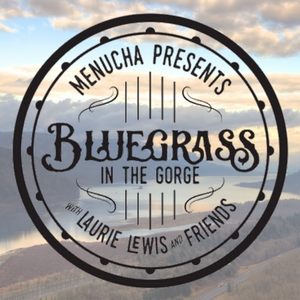 Bluegrass in the Gorge

Laurie Lewis  has for nearly four decades, gathered fans and honors for her powerful and emotive voice and her versatile, dynamic songwriting. She is a sought-after recording producer and an equally skilled teacher and mentor.

And she is an inspiration and a ground-breaker – across genres, across geography and across gender barriers.

Immerse yourself in a blissful world of bluegrass by joining Laurie and friends for a 4-day, 3 night workshop.

We can’t wait to hear the sounds of bluegrass in the Gorge!

Costs are per person and all-inclusive of meals, instruction and lodging. The difference in costs are dependent on the type of lodging chosen. You can choose to be in a single, double (you and 1 roommate) or triple (you and two roommates) occupancy room. You can tell us who you’d like to room with, or we’ll assign you one.

Our rooms will be in Wright Hall, Creevey Commons, Ballard Hall and The Hideaway. You can see what these buildings look like here.

Proof of covid vaccination is required to attend this event.

Commuter (no lodging, just lunches and dinners, and instruction) $585

Would your partner/spouse like to join you but not take the classes? Choose Double Occupancy for yourself, then “add registrant” and choose “non-participating spouse/partner.”

You’ll stay together in the same room, enjoy meals together and while you are in class they can enjoy Menucha. 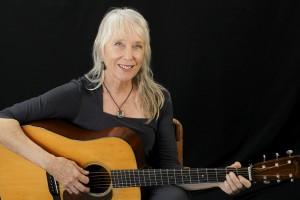 is a dedicated teacher, both in one-on-one sessions and in workshop settings. She has taught fiddle, guitar, songwriting, vocal styles, and harmony singing for many years. She organized and ran Bluegrass Week at Augusta Heritage Center at Davis and Elkins College in Elkins, WV, for ten years, and coordinated the very popular Bluegrass at the Beach in Nehalem Bay, OR, for the full fourteen years of its existence. Laurie’s awards include a Grammy for True Life Blues: The Songs of Bill Monroe in 1997 and  Female Vocalist of the Year by the International Bluegrass Music Awards in 1992 and 1994. She and Tom Rozum were nominated for a Grammy for their collection of duets, The Oak and the Laurel, in the category of Best Traditional Folk Album of 1995. 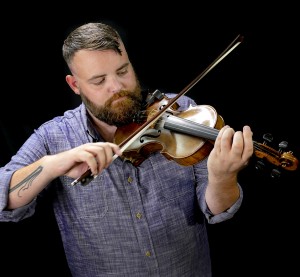 is a Kentucky native, master fiddler, and relatively new transplant from Nashville to San Francisco. He has been playing fiddle for over 20 years, and has a long, professional resume spanning many styles of music. He has toured with Karl Shifflet, Doyle Lawson, David Peterson, Blue Moon Rising, Dale Ann Bradley, and Laurie Lewis, as well as mainstream country music acts.  Due to this variety, a fiddle course with Brandon can touch on everything from Kenny Baker and Stephane Grappelli, to technical discussions and philosophies of fiddling- he is a true fiddle geek! 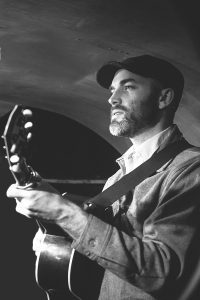 is well-known for his work with Norwegian fiddler Olav Mjelva, Cahalen Morrison, Jayme Stone and more. This Seattle-based singer and multi-instrumentalist oozes understated talent. Eli’s playing both grounds and pushes ensembles with his interest in angular phrasing and non-traditional improvisation within the historic precedents of bluegrass and old-time music.

Eli’s recent debut solo album, The Both, sees him taking the lead, on electric and acoustic guitars, banjo, and pedal steel, whilst remaining a thoughtful collaborator – here with some of his close friends and personal heroes, like jazz great Bill Frisell, new Americana discovery Dori Freeman, and Anna & Elizabeth.

The album focuses on the story of his two grandfathers; one a decorated WWII prisoner of war, the other a Brethren preacher and peace advocate. They couldn’t have differed more, but together they shared a family. In this spirit, the theme of the album is duality: the first half showcases carefully built arrangements of six American folk songs, the second revisits these as instrumental passages, revealing new sides to the other.

Eli grew up on the receiving end of music camps in Western Washington state, and so it feels quite right to come full circle to camp again. 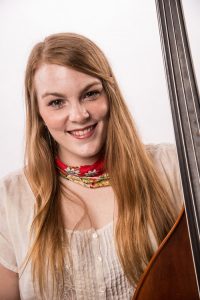 Haselden (Hasee / “HAY-zee”) Ciaccio (“see-AH-ko”) is a performer and educator residing in Johnson City, TN. Born and raised on the coast of Myrtle Beach, South Carolina, Hasee made her way to the Mountain South in 2010 to pursue a study in traditional Appalachian music. Touring around the United States and beyond, she has performed at such notable venues as New York City’s Lincoln Center, the Grand Ole Opry, and PBS’s Song of the Mountains. Sharing the stage with artists among the likes of Mary Chapin Carpenter, Vince Gill, Molly Tuttle, Ricky Skaggs, and David Grisman, Hasee moves listeners at festivals, in concert halls, and intimate venues alike.

Her debut album “HAY” was released in Fall of 2018, featuring traditional stringband music, and top performers of the Oldtime realm. Hasee was a nominee for the International Bluegrass Music Association’s Instrumentalist of the Year award in the Momentum Award category. Currently touring with Laurie Lewis & The Right Hands, among other Bluegrass, Oldtime, and Roots Music acts, Hasee drives the upright bass with honed skill and conviction well beyond her years, and brings Appalachian Flatfoot Dance to the stage with sincerity behind every step. 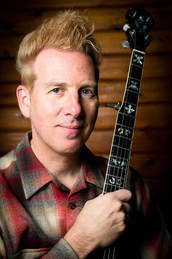 Dave Keenan is a full-time musician and teacher in his home town of Seattle, Washington.
Dave has been teaching banjo since high school and performing since the age of 11.
He is a member of several bands in Seattle, teaches privately and at the Dusty Strings Music School.
He has been a teacher on banjo, guitar and mandolin at the British Columbia Bluegrass Workshop for 15 years, the American Banjo Camp, Puget Sound Guitar Workshop, California Coast Music Camp, Shasta Fiddle Camp, Lake Country Fiddle Pal Camp, Swannanoa Old-time Gathering and Steve Kaufman’s Kamp in 2013, ’14 and ’16.
Dave is a member of the bluegrass band “The Downtown Mountain Boys” whose new CD “Hey John” was the featured CD in Bluegrass Unlimited’s June 2018 issue.

Testmonials from past participants:

“Bluegrass in the Gorge was one of the best music camps I’ve ever attended. The setting is beautiful and the food is great but what I appreciated the most was the structure – the workshops were so well-designed for learning. Sometimes camps have a frenetic pace but here we weren’t rushed. I had time during the camp to revisit what I’d learned so far. I came back feeling like I’d been at a music retreat – refreshed and inspired, not exhausted.” – Linda Leavitt

“After many years of admiring Laurie Lewis and Tom Rozum, I was so excited to have a chance to learn from them. I was not disappointed. They filled our days with wonderful music and vast knowledge of the bluegrass genre. I came away inspired and excited for the next opportunity to work with them!”  – Anna Berry

“What I loved most about this weekend at Menucha was the personal touch everyone received from Laurie and her friends. In the rhythm guitar workshops, Laurie offered useful tips to each individual player tailored to their skill level. I know I came home with a few gems! I also loved that she stressed the importance of a rhythm guitar player, whether or not they had interest in learning to play leads. And the harmony workshop where we all learned to sing A Beautiful Life was such a great way to top off a wonderful few days of Bluegrass in the Gorge!”  – Molly Westmoreland

“I went to Menucha to see Laurie and Tom and was happy to listen to stories and learn a few things.  Both are warm, friendly, inclusive people who have made a study of bluegrass music for all of their adult lives. I try to see them when they come this way and am never disappointed.  Their music, their detailed understanding of it and their ability to share with others are simply top notch.  As someone who likes to sing, I was especially happy that I went.” – Elliott Picciotto

“I had been really looking forward to meeting and having classes with both Brandon Godman and Justin Hiltner, because I play both fiddle and banjo. Getting to meet and interact with them was my favorite experience at camp. I was very satisfied with their classes, as well.” – Donna Dunaif

“I came away from the experience with a better sense of serenity and community than I had when I got there.  The picturesque setting and helpful, informative staff made Menucha a wonderful retreat from the bustle of daily life.  The great musical instruction and enthusiastic students made Bluegrass in the Gorge a one-of-a-kind chance for hands-on learning with Laurie Lewis and her friends.” – Nora Candey 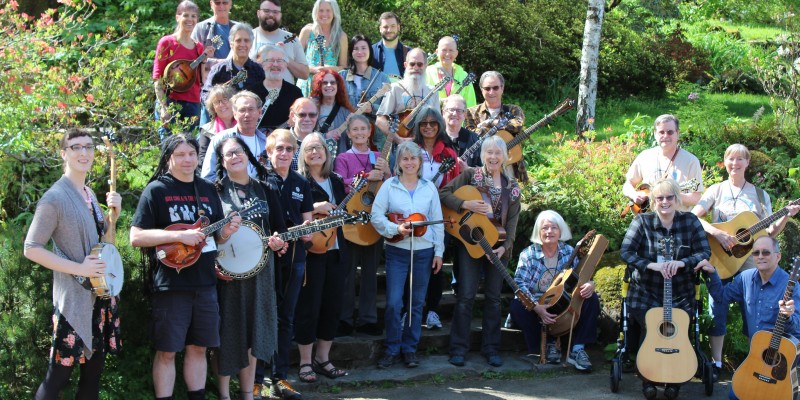 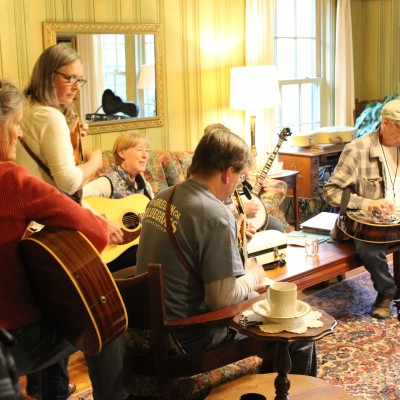 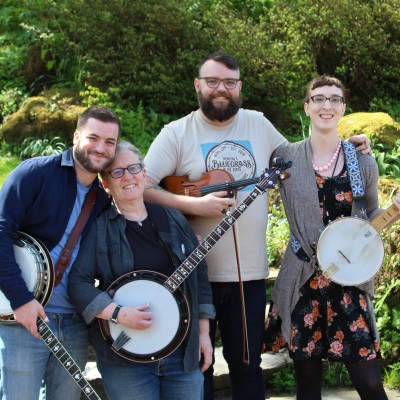 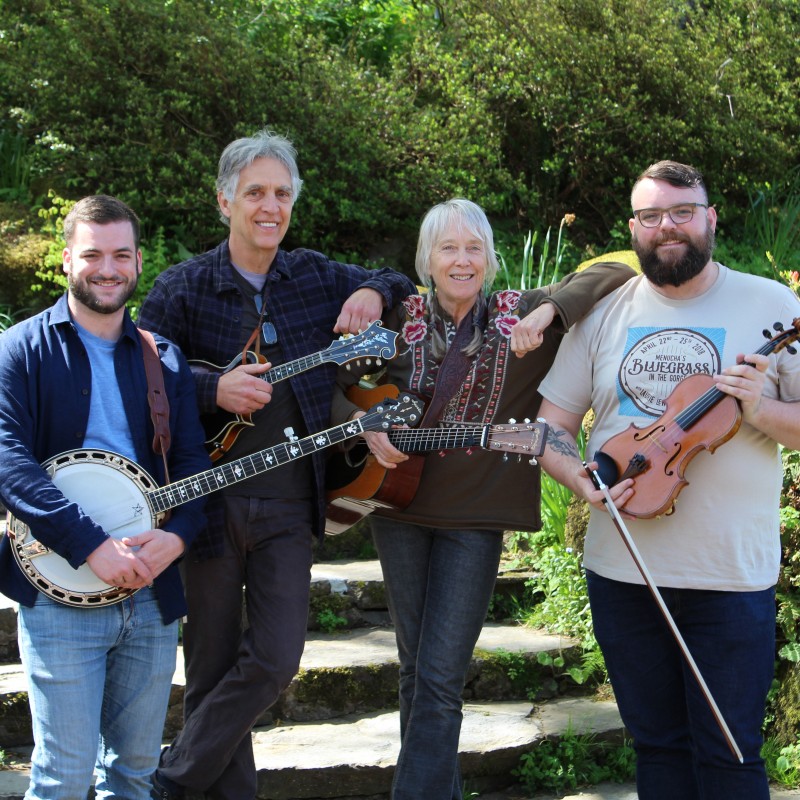 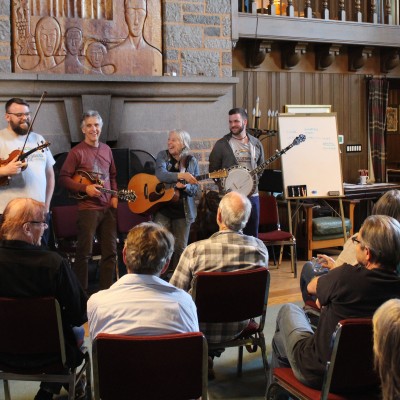 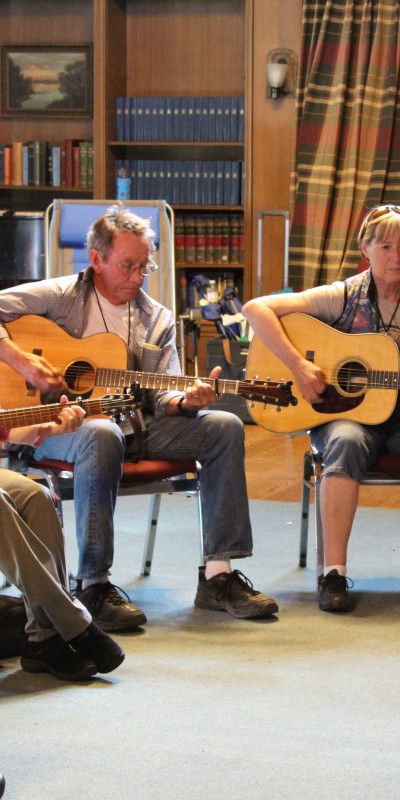 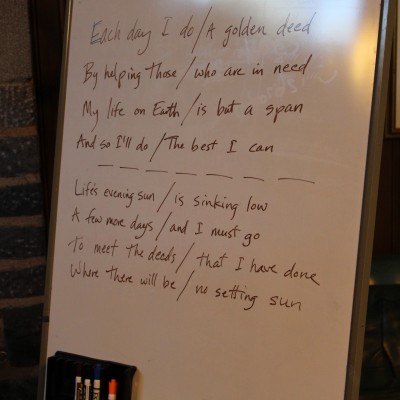 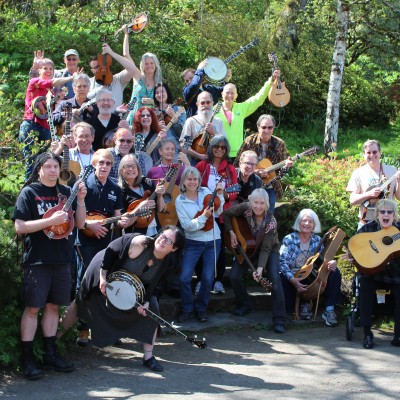 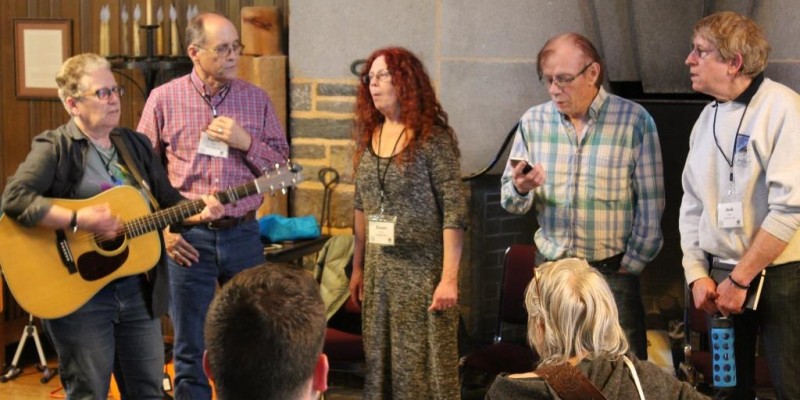 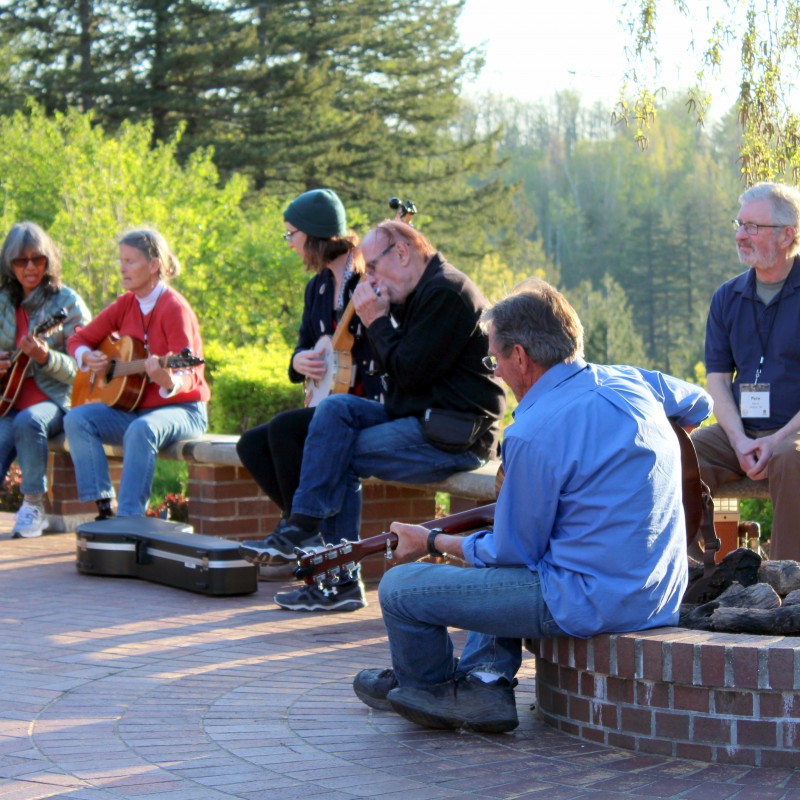 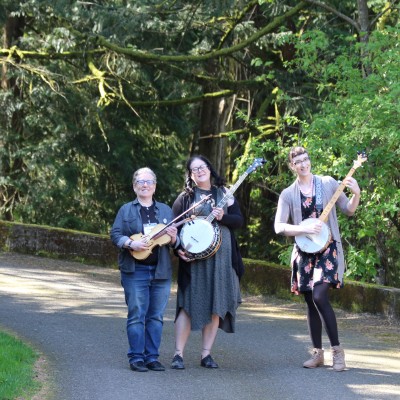 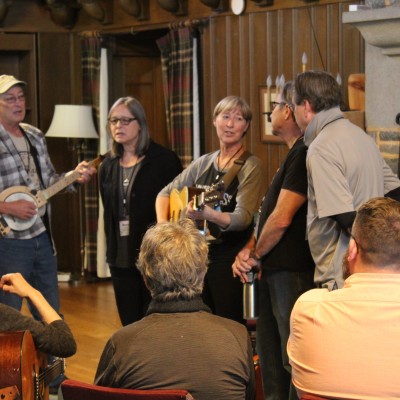 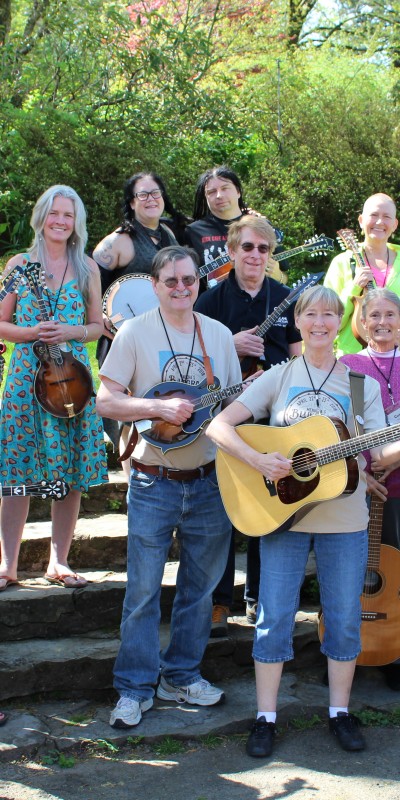